News from the Café

From Cafe Copywriter to TED Speaker

As well as writing for large organisations, I write for pleasure, for my own personal interest and growth. Last summer I began writing a blog called Dress to Express. Over the months it attracted an enthusiastic following and less than a year on, in a quite extraordinary twist, it led to me becoming a TED speaker. The talk will soon be available on YouTube. In the meantime you can read more about it here…

I say this was an extraordinary twist because the blog was something I created entirely for myself to help me get through difficult times. There was no endgame, no plan to use it as a jumping off point into something else. The fact that a blog about private and personal struggles has catapulted me into a very public spotlight seems more than a little ironic. 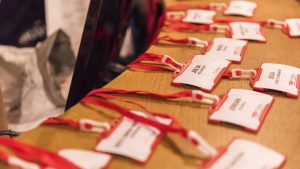 It was a scary and strange thing to leave behind the solitary seclusion of the café and step onto a stage in front of a live and online audience. Despite appearances to the contrary, I am naturally quite shy and often have difficulty speaking out in front of people, even small groups of people. However, I have never been one to shy away from a challenge or give in to fear so I did the talk in spite of my fear… and I have been overawed by the response.

Dress to Express began as an exploration of my personal relationship with clothes, charting a particularly challenging period of my life. During this time, I noticed that I was using my clothes – somewhat quirky and self-expressive as they are – to support me and bolster my confidence. What began as a simple record of the clothes I was wearing grew into an exploration of my personal challenges and our complex relationship with clothes as humans. 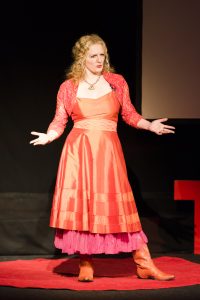 The theme of TEDx Totnes 2017 was Change Drives us Forward. The organisers liked what I was saying because, although on the face of it, the talk was about clothes, of course it was about much more. It covered themes such as freedom, prejudice and self-expression.

If you know anything about TED, you will know that it is not easy to become a TED speaker. You have to be invited to speak and the selection process is a rigorous programme of meetings, conversations, writing and refining. It took approximately six months. There were around 50 hopefuls for 12 speaking slots. At the end of this, my talk was accepted and next began the process of transforming myself from someone who was too afraid to speak out at team meetings into a confident TED speaker, able to step out onto a stage without notes or autocues and give a 15-minute talk. I wrote a blog about this process, which you can read here.

Thanks to an unfailing belief in me by my friends and the TED organisers, some amazing coaching by TED speaker coach Danielle Krage and my own determination to say what I wanted to say and not to be beaten by fear, I did it. I stepped out onto the round red carpet at 2.20pm on Friday May 12 and delivered a talk called What Toddlers Teach Us About Style. 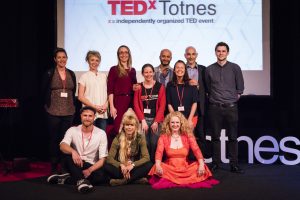 My TED talk will soon be available on YouTube. I will publish a link to it in my next newsletter. It was an extraordinary journey and I suspect it is just the start of another. Already I have been approached to speak again on the same topic.

If you are interested in hiring me as a speaker on the topics of personal freedom, self-expression and growth or if you would like me to write a speech for you, please get in touch.

Why Organisations Tell Stories (and How to Do It)